SCREAMING FOR CHANGE.... THE REPRESS! 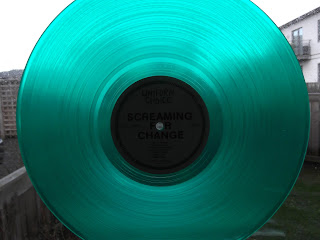 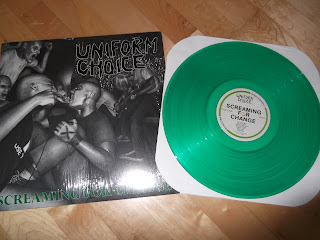 Seven days ago I was alerted by my friend Cam that Revelation were selling reissues of Screaming and that they were on colour. I have to admit I was puzzled that a) there hadn't been a massive fanfare regarding this and b)it was Wishingwell Records that was reissuing it. Anyway I ordered and waited literally a week before my Lp arrived in record time. I was eager to see what colour the repress was going to be a much to my surprise it was on clear green. Now lets get down to the nitty gritty here and explore this in more detail. The legit and original second press of this record was also released on clear green way back in 86 with green lettering on the sleeve to match. So what do I actually have here?? Do I have one of those or a repress using the very same colours as in 86. Looking closely at an original version there really isn't that much difference other than the shade of green used on the sleeve is marginally different. The labels are again marginally different but not really enough to separate both the original and this version. However after being pointed in the direction of matrix etchings there is a difference. I'm still bemused about this record as there doesn't seem to be any significant pressing info at hand and the fact that the colours match almost identically the 86 pressing throws a a lot more questions into the mix than answers. At $11 I guess its a definite bargain though!!!!
Posted by Lins87 at 12:32

Just got round to opening mine copy today. Don't know if you noticed but the dead wax after the last track on each side is smaller than the original 2nd press also not having an insert make it look cheap. 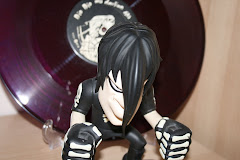 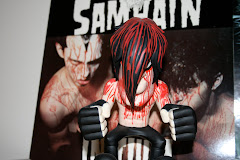 Never Ending Game is basically a testament to record collecting, because thats what it feels like. You buy records, you trade records but you will never complete your collection! A Never Ending Game! I'm posting this blog for no other reason than to archive and picture certain records within my collection that are interesting in historical value or by their appearance. It provides myself with an easy look up tool and means that I can now leave my little plastic friends safe and happy in their respective crates! Obviously I'm not a complete nerd and will occasionally play them just to experience the true beauty of vinyl. Records to me are more than just music but a marker on certain times in my life or pieces of punk rock history. I will be adding to this blog regularly with old and new purchases so please check it out every so often and feel free to comment or correct my listings. Also click on the actual photos for a larger shot of each record on display. One last thing.VINYL RULES!